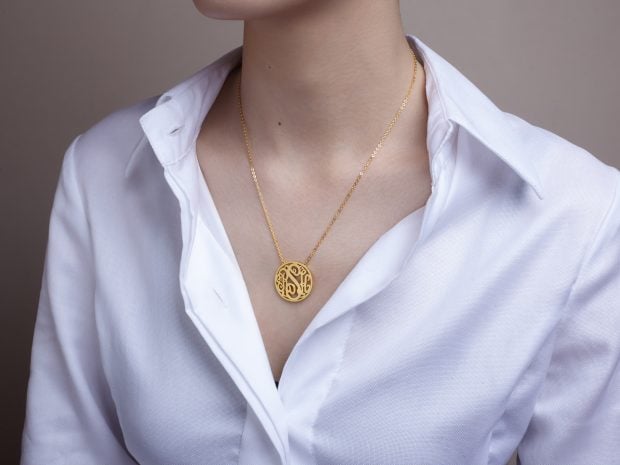 A classic monogram gift is among the most popular personalized gift you can get for someone, especially for weddings, bridal showers or birthdays. This post will teach you how to write a monogram, be it personal monogram or couples’ monogram as well as give you suggestion of cool things to monogram.

WHAT IS A MONOGRAM? WHAT DOES MONOGRAM MEAN? 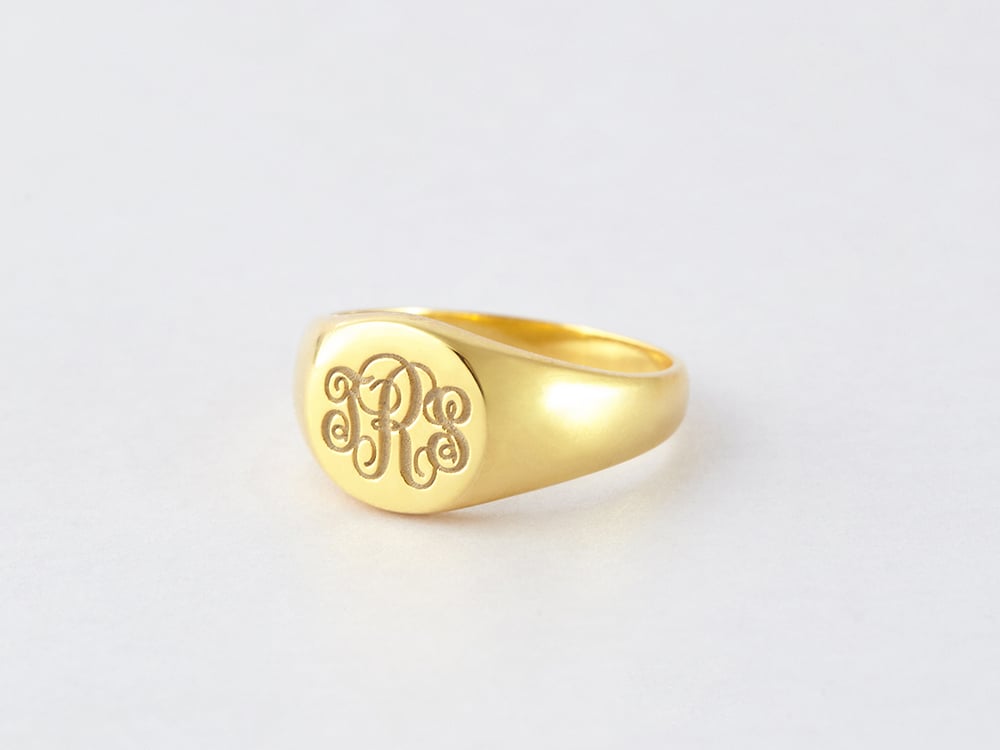 A monogram is a typography design that connects 2 or multiple letters, traditionally in a flowy, cursive fonts. The initials are often interlinked or wrapped together by a border, and they usually come together to be a calligraphy artwork by themselves.

A monogram often comprises a person’s initials  — often first, middle, and last name – or couples’ initials or family members’ initials. Monograms typically has 2-3 initials, with 3 being the most popular for aesthetic reasons. 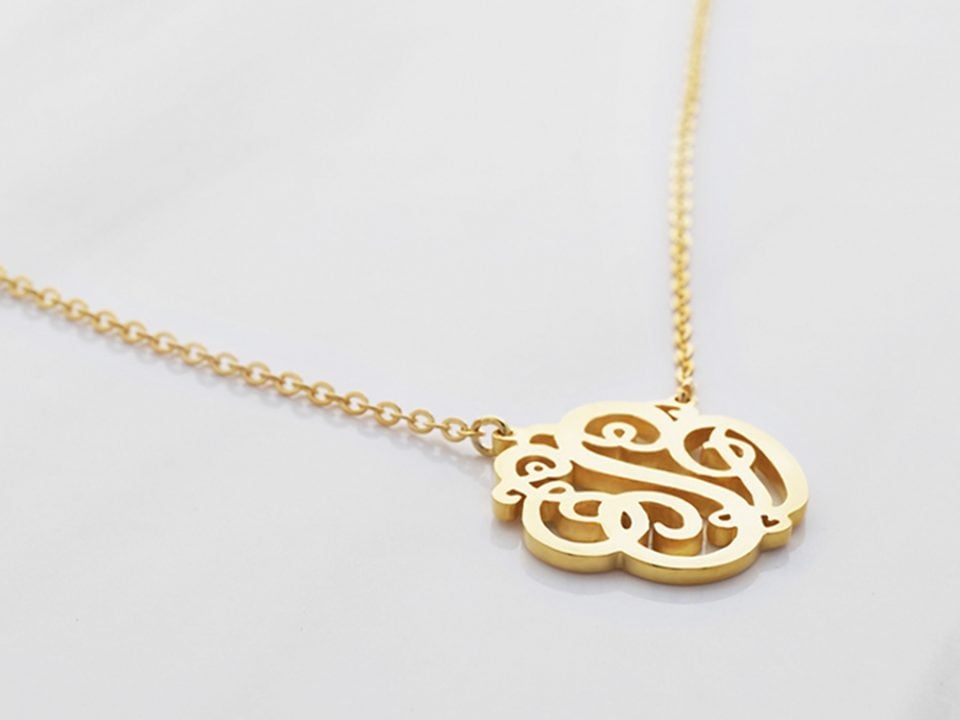 The meaning of monogram is attached to what initials they capture. For example, bridal shower gift with 3-initial monogram often celebrates the new family name the bride is taking on.

On the other hand, the same 3-initial monogram on a Mother’s Day present could be the initial of all the kids or members of the family. So it is really up to you to select the initials that mean the most to you.

WHAT ORDER DO INITIALS GO IN A MONOGRAM? 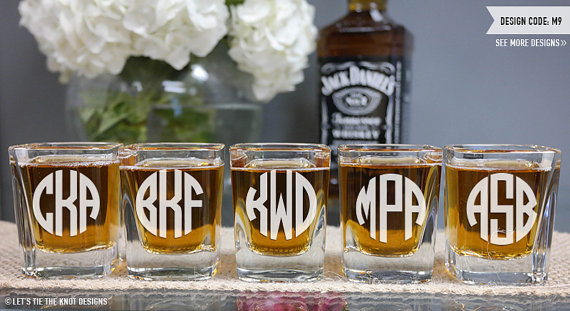 As a jeweller and monogrammer, the most frequently asked questions we received is how to write a monogram and what order do initials go in a monogram.

The order of letters for a monogram can depend on acouple of factors, but roughly they can be categorized into 2 types: personal monogram and couples’ monogram. Traditionally a 3-initial monogram follows this order: first name initial,  last name initial and finally  middle name initial. This is because the center initial in a monogram is often the largest thus it often goes to your family name. That said, of course you could choose to have it in any order you wish. 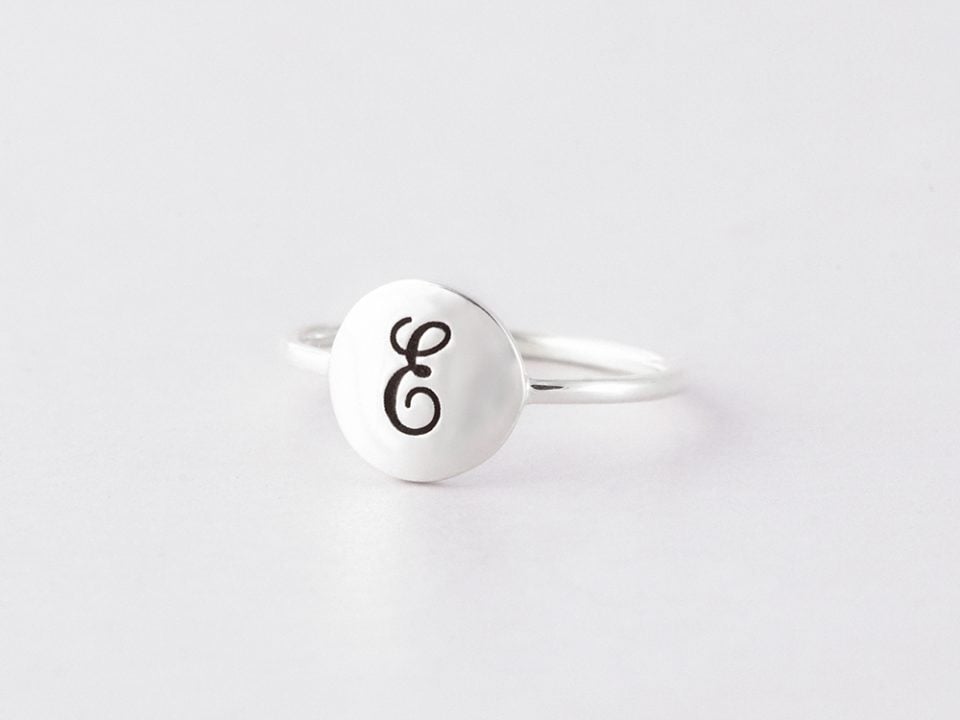 A woman’s initials could change when she gets married. In that case, she would traditionally make her given last name her new middle name, and take the husband’s last name in place of her own. Consequently, their personal monogram changes by two letters, explaining why monogram gifts are among the most popular gift for bride as it celebrates her new identity as wife.

However, take note when you are buying monogram gifts that there are many ways that a couple could take on the name change. Some couples keep both their last names, separated by a hyphen. Some women are using their new names socially but not at work, where they keep the maiden names. Just remember there is no right or wrong way to monogram – it is just up to personal preference.

Couple’s monogram is another popular monogram choice for gifts, especially popular for utensils, stationery or beddings.

The traditional order of married couple monogram is groom’s first name initial, followed by the couple’s surname initial and the bride’s first initial. For example, the couple monogram for David and Victoria Beckham would be DBV, with the center initial being slightly larger. 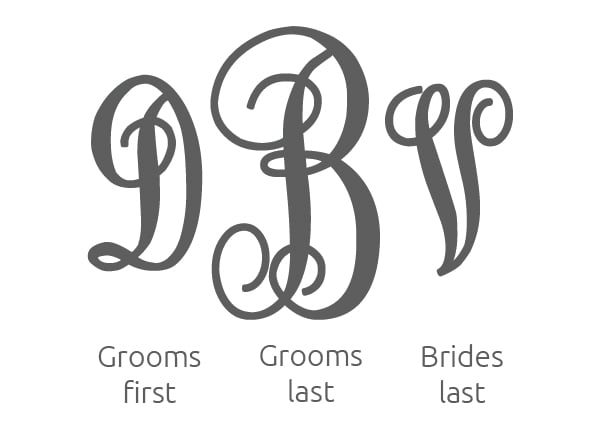 Recently there has been a shift in the traditional order to one with the women’s initial being first instead of the the man’s, i.e. VBD in the case of the famous couple. 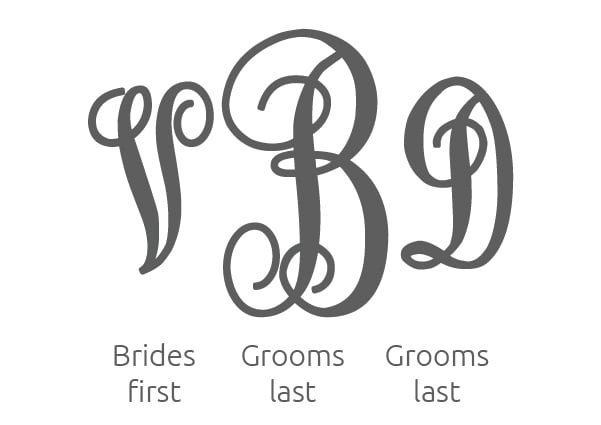 If the newlyweds decide to share a hyphenated last name, it can be reflected in the monogram for married couple. Victoria Adams and David Beckham would be the Adams-Beckham family and use V A-B D as their joint couple’s monogram. 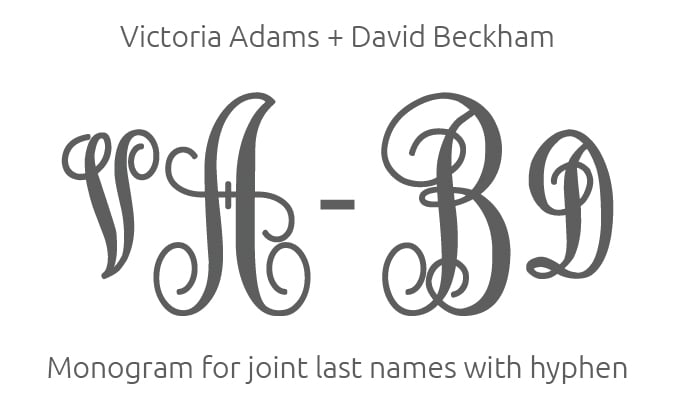 If the bride keeps her maiden name, the custom monogram for couple will be a simple 2-initial monogram from the last names of the newlyweds. For example, Victoria Adams and David Beckhams will use AB or A*B as their joint monogram. 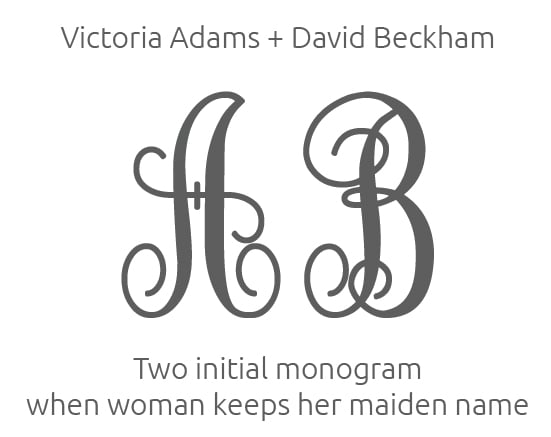 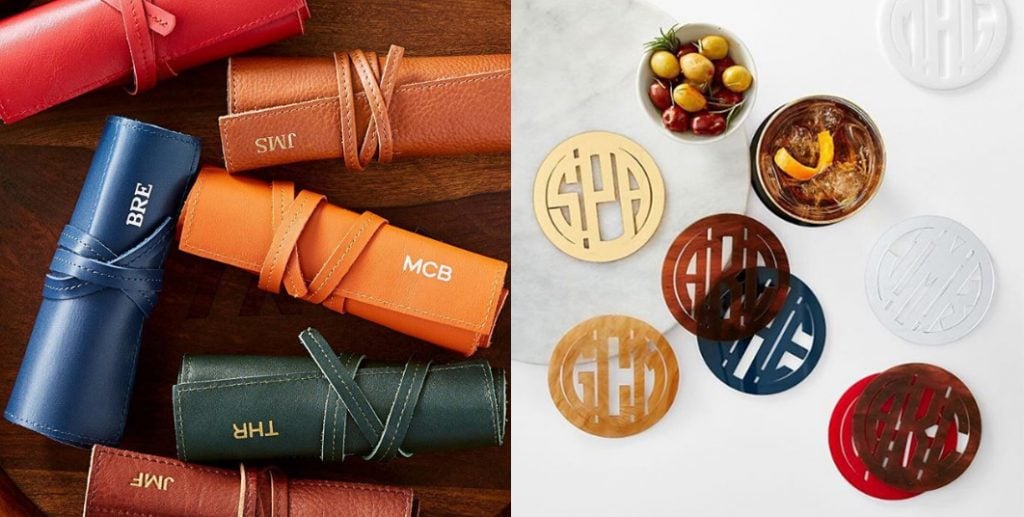 Examples of  Block Monogram and Monogram with Larger Center Letter

There are 2 monogram types: one with the initials being the same size, also known as block monogram, and the more common one with the center initial being slightly larger.

– Block monogram: is only used for personal monogram. In this case, your initials are ordered like your name: first, middle and last.
– Monogram with larger center initial: is used for both personal and couple monogram. When used for personal monogram, the order will be first, last and middle name’s initial. Couple monogram will only use this style of monogram, and in the order explained above. 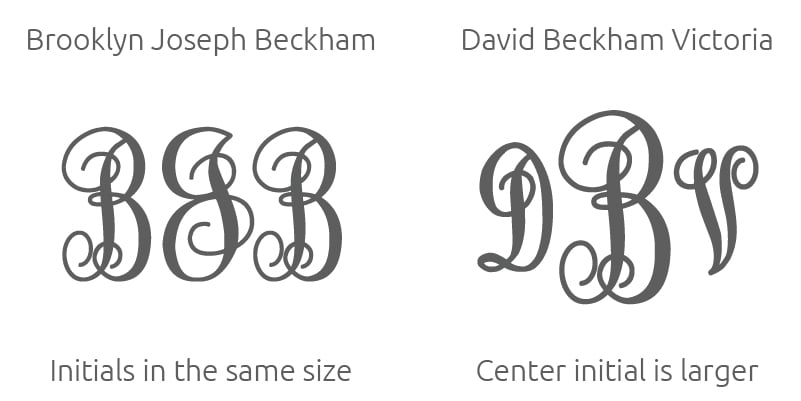 There are many cool things to monogram, from robes and jewelry to doormats. But while a couple of personalized monogram objects could be special, too many of them could come across as a little self-centred. Opt for one or two monogram items, like silver tableware or a necklace to personalize your dinner table or outfit, and you are good to go!

I have selected some of the most modern and coolest monogrammed personalized gifts around the web that you might want to put on your registry: 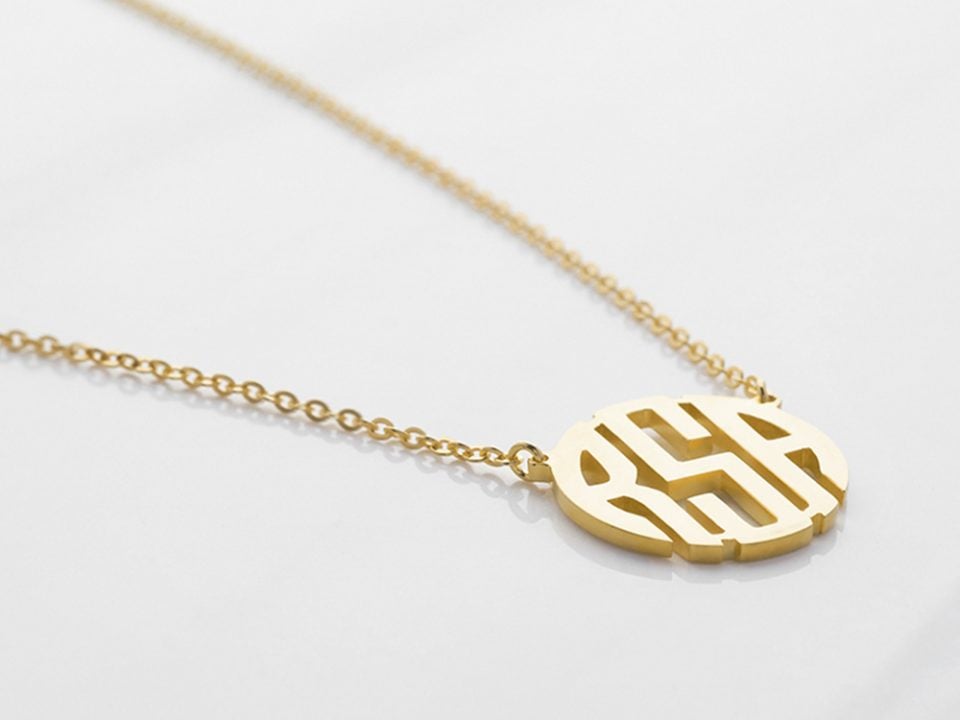 This monogram bracelet doesn’t stop at being a cool bracelet, it can also charge your Iphone!

This monogram sherpa pullover is a trending search on Etsy this winter: 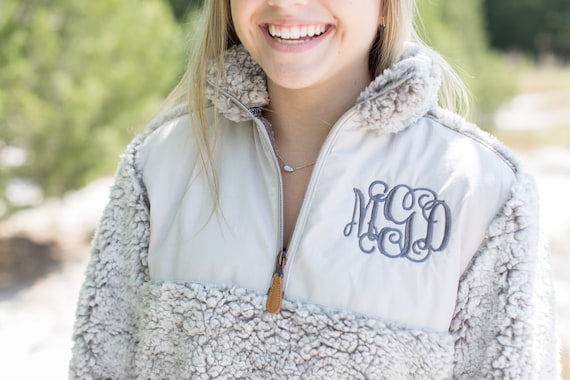 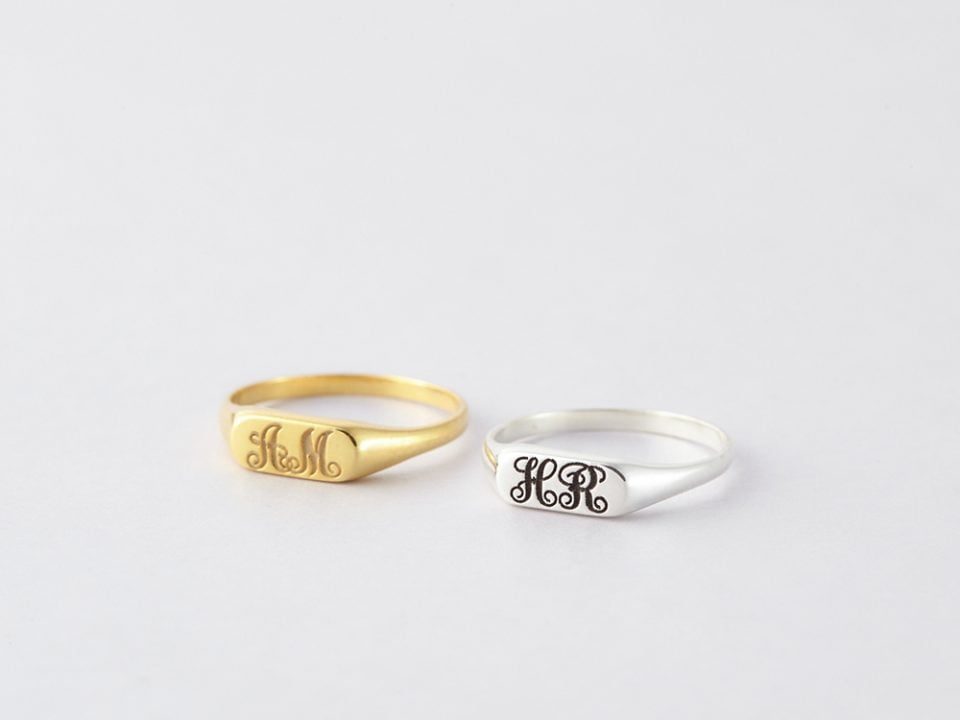 Finally, this monogram leather charger roll-up is such a cool monogram gift for the tech-savvy, dapper man of your life: 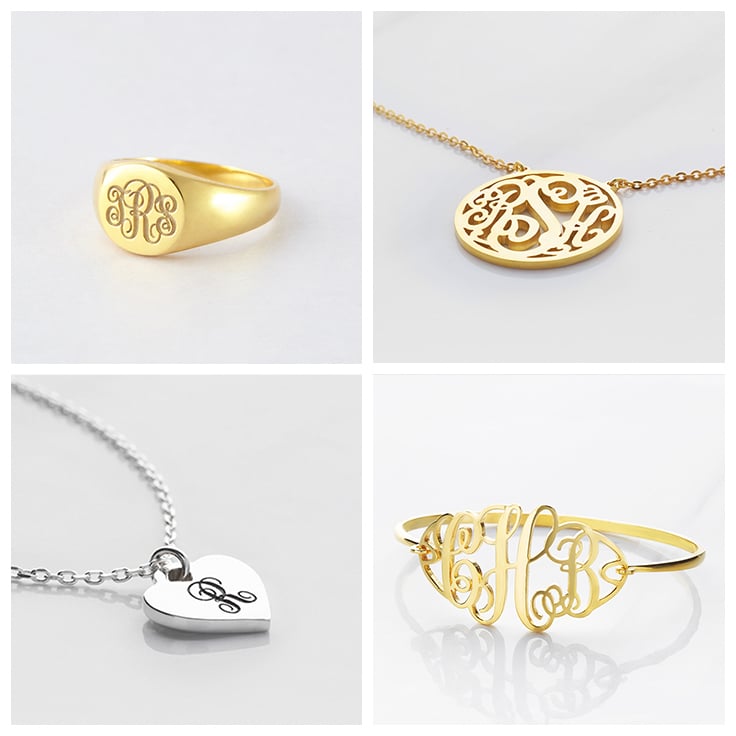 If you have any more question on how to monogram or ideas on the best things to monogram, share them with me below!

Hello, it's Ginny. I am a mother of two beautiful kids and I love to do craftwork in my spare time. I started Centime out of a dream to create handmade gifts with a timeless appeal and personal touch. With this blog, I wish to impart my knowledge from years as a jeweler so that you can pick out gifts of everlasting love. 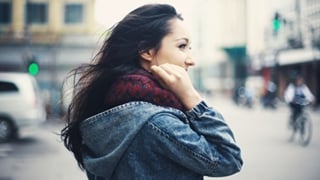 Hi, I'm Ginny. Welcome to Centime's blog. I started Centime because I was sick of generic, branded gifts with no soul. As I have always loved to make my own jewelry and gifts, I dreamed of creating handmade gifts with a timeless appeal and personal touch. Centime was born out of that dream, and I am grateful to be living my dream everyday. All the posts in this blog were written by me, using years of experience as a jeweler so that you can pick out the perfect gifts that are not just gifts but symbols of everlasting love. Love for keeps, we call them. My colleagues and I also occasionally post inspirations and customer stories that touch our heart. We will also keep you updated of any changes going on in our store. I hope you enjoy this blog, and keep loving <3
Ginny of Centime 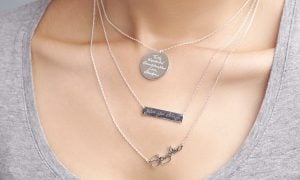 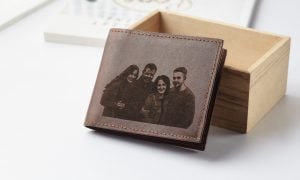 Father’s Day Gift Ideas For Every Dad And Budget 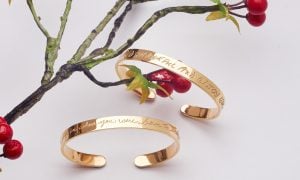 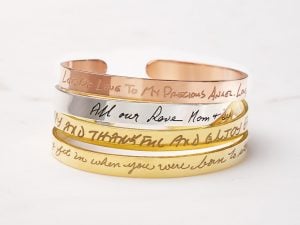 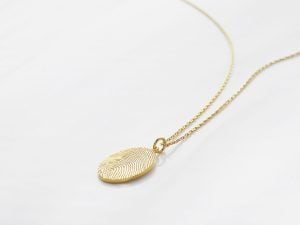 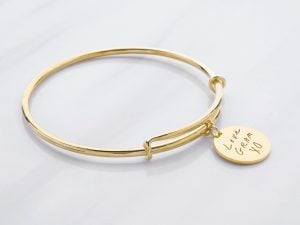 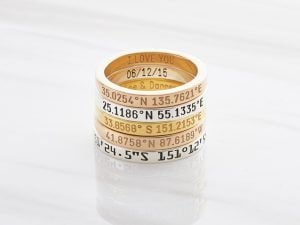 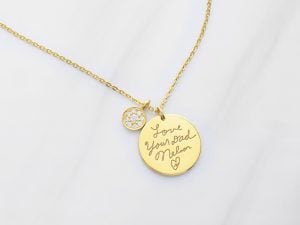